Member GRAND BOARD OF TRUSTEES 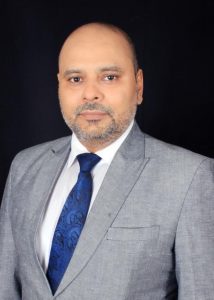 Dr. Bikash Sharma is a management professional with over 20 years of experience in the Education, Management, Human Resources and IT Enabled Services domain. Dr. Sharma is currently the President and Founder Trustee of the International Academic and Management Association (IAMA) which was established with his efforts in the year 2013. Since his early working days, Dr. Sharma had a keen inclination towards education and wanted to do something which would make education more practical, dynamic, boundary-less and affordable for all. His dream became a reality with IAMA. Today, IAMA under his stewardship has its footprints in over 43 countries offering its services to nearly 150 educational institutions, benefitting thousands of students globally.

Dr. Sharma is also on the Board of Advisors of several educational institutions globally including POMA International Business University (Worldwide), Oxford University of Namibia, CEPRES International University, etc to name a few.

He is also the Advisor to the Jury Council of AsiaOne Magazine which is a leading B2B magazine with circulation in 10 countries across South East Asia and GCC Considering his role as a global change agent in the field of education, Dr. Sharma has been appointed as the Co-Chair of the Center for Education Sustainability Board located in the USA Dr. Sharma is also a Trustee with Earth Quotient, a pressure group working on issues related to the environment and the voiceless.

He is also an Advisor to the Ministry of Agriculture, Government of Liberia, working closely with the government on issues related to Food Security, Agriculture Technology and Education

Dr. Sharma and IAMA’s contribution in the field of education has been widely recognized on the global platform. The same is evident from the numerous national and international awards won by both Dr. Sharma and IAMA since inception. The list of awards and nominations include:

1. Business Leader Award for Exceptional Achievement and Business Transformation in the Education Sector in the year 2015 by Middle East, North America and Asia (MENAA) Awards Organization and the Federation of Awarding Bodies(FAB), UK at Burj Al Arab Dubai

2. Best Customer Delight Award in the Education Sector in the year 2015 by Middle East, North America and Asia (MENAA) Award Organization and the Federation of Awarding Bodies(FAB), UK at Burj Al Arab Dubai

3. IBSAF Excellence Award for Social Contribution in the year 2016, organized by the IBS Alumni Federation at New Delhi

4. Nominated for the Best Regional Enterprise and the Manager of the Year in 2017 by the International Socrates Awards Nomination Committee, Oxford UK

5. Awarded for Contribution in the Field of International Education in 2017, by ASIC UK, at Kuala Lumpur, Malaysia

8. Awarded CEO of the Year at the event conducted by GECL in India in December 2018

9. Was felicitated as the Most Dynamic Personality in the Field of Education at the Global Leaders Award held at JW Marriott, Dubai in March 2019

10. Was felicitated with The Global Education Leader of the Year Award at the Game Changers Business Awards held at New Delhi in April 2019

11. Recognized as The Personality of the Year at the International Academic and Research Excellence (IARE) Awards held at New Delhi in June 2019

12. Felicitated with the “Movers and Shakers” Award at the Asia HRD Awards held at Kuala Lumpur, Malaysia in July 2019

13. Received the coveted Everest Award at New Delhi in November 2019 for his contribution in the field of education